An invasive species of Triatominae also know as the “Kissing Bug” has been found in several US states and can cause bites that lead to heart failure.

The Triatominae usually found in South America has now made its way into the US, and can bite you in your sleep, causing terrible bites. They are carriers of deadly parasites called Chagas, that once enter the blood stream can lead to heart failure.

So far they have been found in mostly the southern states like Texas and Arizona but they are on the move, and quickly spreading northward.

The members of Triatominae, a subfamily of Reduviidae, are also known as conenose bugs, kissing bugs, assassin bugs, or triatomines. Most of the 130 or more species of this subfamily are haematophagous, i.e. feed on vertebrate blood; a very few species feed on other invertebrates.

They are mainly found and widespread in the Americas, with a few species present in Asia, Africa, and Australia. These bugs usually share shelter with nesting vertebrates, from which they suck blood. In areas where Chagas disease occurs (from the southern United States to northern Argentina), all triatomine species are potential vectors of the Chagas disease parasite Trypanosoma cruzi, but only those species (such as Triatoma infestans and Rhodnius prolixus) that are well adapted to living with humans are considered important vectors. 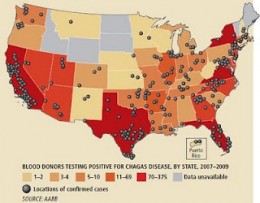 In 1909 the Brazilian doctor Carlos Chagas discovered that these insects were responsible for the transmission of T. cruzi to many of his patients in Lassance, a village located on the banks of the São Francisco River in Minas Gerais (Brazil). Poor people living there complained of some insects they called barbeiros that bite during the night. Carlos Chagas put his first observations in words:

“Knowing the domiciliary habits of the insect, and its abundance in all the human habitations of the region, we immediately stayed on, interested in finding out the exact biology of the barbeiro, and the transmission of some parasite to man or to another vertebrate”.

Domestic and sylvatic species can carry the Chagas parasite to humans and wild mammals; birds are immune to the parasite. which is extremely dangerous to humans.T. cruzi transmission is carried mainly from human to human by domestic kissing bugs; from the vertebrate to the bug by blood, and from the bug to the vertebrate by the insect’s feces, and not by its saliva as occurs in most bloodsucking arthropod vectors such as Malaria mosquitoes.

Triatomine infestation especially affects older dwellings. One can recognize the presence of triatomines in a house by its feces, exuviae, eggs, and individuals themselves. Triatomines characteristically leave 2 kinds of feces like strikes on walls of infected houses; one is white with uric acid, the other is dark (black) containing heme. Whitish or pinkish eggs can be seen in wall crevices. After having had a blood meal the insects sometimes show a limited mobility and can be identified easily. 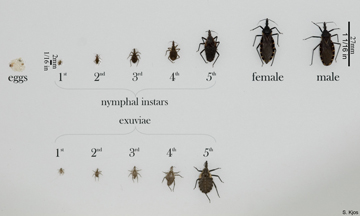 Most triatomines aggregate in refuges during day and search for blood during night when the host is asleep and the air is cooler. Odors as well as heat guide these insects to the host. Carbon dioxide emanating from breath, as well as ammonia, short chain amines and carboxylic acids from skin, hair, and exocrine glands from vertebrate animals, are among the volatiles that attract triatomines. Vision also serves triatomines for orientation. During night, adults of diverse species fly to houses attracted by light. 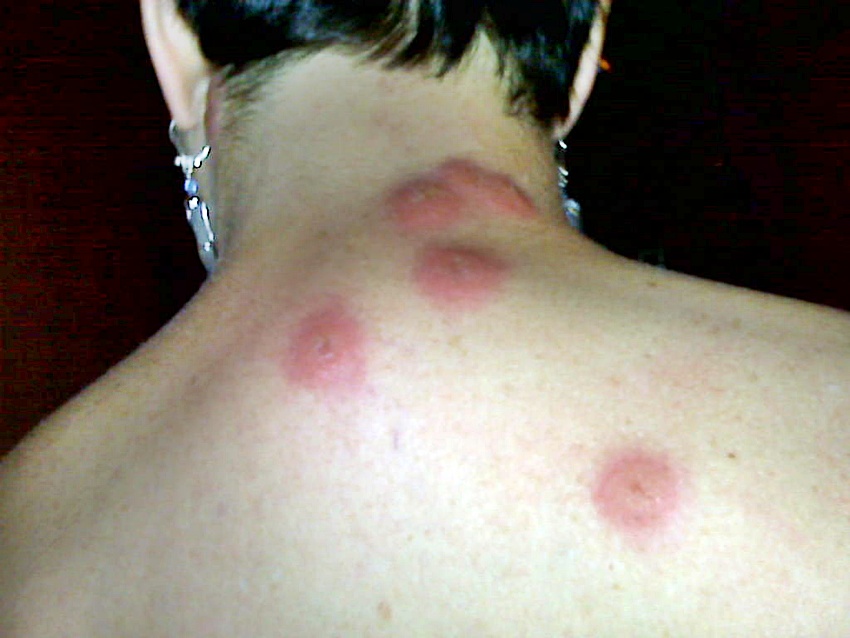 Adults produce a pungent odour (isobutyric acid) when disturbed, and are also capable of producing a particular sound by rubbing the rostrum over a stridulatory sulcus under its head (stridulation).

Where are triatomine bugs typically found?

Triatomine bugs (also called reduviid bugs, “kissing” bugs, assassin bugs, cone-nosed bugs, and blood suckers) can live indoors, in cracks and holes of substandard housing, or in a variety of outdoor settings including:

Ways to Prevent the Kissing Bug from Entering your Home:

Synthetic pyrethroid sprays have been used successfully in Latin America to eliminate house infestations. Although similar chemicals are available in the United States, none have been specifically approved for use against triatomine bugs. A licensed pest control operator should be consulted if considering the use of insecticides. Please note that roach hotels or other “bait” formulations do not work against triatomine bugs. Long lasting insecticide treated bednets and curtains have been shown to kill these bugs.

Spray regularly with pesticides inside and out of your home. About every 30 days and outside after it rains. Spray all doorways, window edges, seems of the way along base boards and inside lower cabinets and inside garages. Since this bug attacks at night, it may be a good idea to spray under beds and along walls near the beds. Be careful not to spray near or on things you regularly use, best to clear out areas before spraying.

Keeping your house and any outdoor pet resting areas clean, in addition to periodically checking both areas for the presence of bugs.